2013: The Year in TV and Music
...and where America made Kanye bigger than the Pope 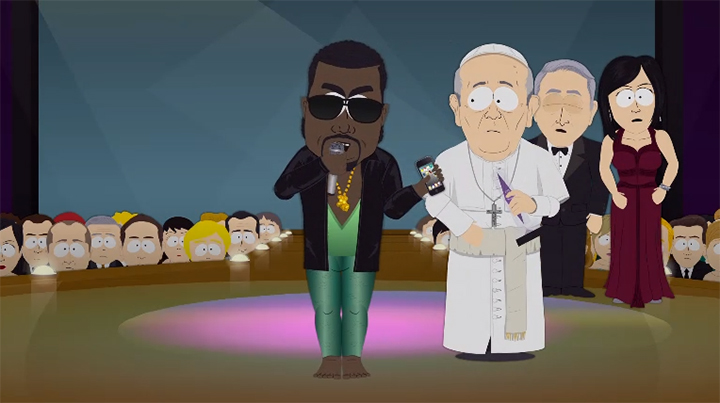 I’ve really been disappointed with the media “buzzfeeding” of today.  It came to full disgust when Miley Cyrus decided to do something shocking just to create some water-cooler talk; it was the day the shocking became disingenuous.  The question the next day was “What was the point?”. It bothers me more that people just try to explain the abstract with a handful of animated GIFs without digging deeper and providing some insightful content into the topic presented. It bothers me that powerful governments and corporations want people to be focused on celebrity happenings in order to ignore the fallacies of their bureaucracies and our own lives. I admit, I watch TMZ and The Soup because it makes me happy knowing how unworthingly stupid people can get for the sake of celebrity.  At the end of the day, celebrity resets itself and only people with cultural influence and significance live on. For that reason, along what current society’s short-attention span, only moments meant to last will last.

That’s all I have to say on that.  When you have the schedule I have,  you tend to appreciate television more and you try to sneak in as much new music as you can whether its NPR, the Hype Machine, or Hip Hop Is Read.  So I got nothing else abstract to add since it’s taken me only the past couple days to put these thoughts down mixed in with some mindless turns in CIv5.

01- Breaking Bad
Very few series know how to end themselves and even some of the best (Sopranos, The Wire) just fail to give a proper send off.  For that, it will be hard for me to displace BB as the GOAT of TV drama.  I’m not gonna explain myself; you are just gonna have to find reason why another show should displace the other.

02- Game of Thrones
I won’t the read the books;  I’m just waiting for the moment where the book readers get screwed the moment television show starts its own arch.  But kudos, for having the one episode that broke social networks showing just how too serious people take their television.

03- Mad Men
I dunno. It’s weird how the 60s had all these significant events that could define characters in the series while, in the end, it’s all fodder.  Personally, it may have worked for breaking Bad but breaking the final Mad Men season into two is bad idea.  The 60s are in the best. Just end it already.

04- The Americans
While we are speaking about decades, there is nothing wrong with the Cold War 80s.  I didn’t care for Felicity when she came out parading as the spokesmodel for a fake NYU, but beauty comes with age for  Keri Russell, which is why, right now, she is the perfect femme fatale on any show.  And while the Mad Men tended to treat history like a footnote,  history for this show draws more and more why the Soviets scared the US making you want to watch more.

05- Continuum
Usually sci-fi time traveling plot lines are never done write, but it has gotten interesting up this point. With hockey and curling, add sci-fi time travel to the list of things Canada does well.

06- The Bridge
I believe this show has the ability to break borders to say the least.  Just as the Wire revealed a Baltimore no one was ready for,  The Bridge has revealed an unrecognizable reality in US/Mexico relations.  While this seaon’s main plot device thankfully ended, it was essentially an understanding of the people whose lives evolve around the El Paso / Juarez area that made this show worth watching.

07- Parks And Recreation
NBC has only four assets: Saturday Night Live, Sunday Night Football, The Voice and this masterfully crafted comedy.  Somebody tell this network, the 90s are over.

08- Veep
Yes, politics is ridiculous and I’m glad this show captures every moment of it.

09- Girls
If you take away the last episode of the season, this show was brilliant.  But you can’t do that, since that episode made the whole season an utter disappointment.

10- South Park
So Stone and Parker finally got off their Mormon high horse and got back into what they do well, which is shame celebrity stupidity.  Beside the Hobbit, the literal pissing on George RR Martin in the Black Friday series is brilliant.

11- New Girl
It may start seeming to turn itself into the modern version of Friends, but it’s still funny nevertheless.

12- The League
Like Sunny, you have to appreciate shows that know how to capture adult immaturity in its finest half-hour.

13- Arrested Development
I feel Netflix can kill a show that could’ve been better appreciated  in piecemeal.  Also, it could have been more hilarious if they could have thrown in more jabs at Portia DiRossi’s facelift

Shows I Should Be Watching (maybe I’ll catch up on them):
Sunny - I’m rolling through them right now but only on Season 4
Orange Is The New Black - You would’ve thought I would’ve binge-watched this by now
Eastbound and Down
Top Of The Lake - I have all the episodes, so there should be no excuse

01- Chance The Rapper - Acid Rap
If you can get past the psychedelic-induced Jadakiss-type cackles that come off every now and then, then you know this surprise of a mixtape didn’t need boast or hype to come across as unique and listenable.  When a rapper makes you listen to his words and insight, you know are listening to someone with a future in this game. Kanye may try to project himself as the GOAT of hip-hop, but, right now, he ain’t the hot new thing to come out of Chi-town.

02- Daft Punk - Random Access Memories
I really wonder what the hipster snobs who righteously claim death to disco really think about this album.  And like it or not, Pharrelll is going after Michael Jackson’s title and he may just have the swoon to do it.

03- Vampire Weekend - Modern Vampires Of The City
You’d figure the glorification of NYC would be over by now, but a band that currently sits atop that apex took that notion into a brilliant spin that questions that particular sanctity. It alwyas good to listen to a band who truly understand where they are at that moment.

04- Kanye West - Yeezus
It’s universal truth that Mr. West is an egotistical asshole.  But is it truly wrong to like a musician who can be a brilliant producer at one end but blasphemous narcissist on the other?  For example, “Blood On The Leaves” is, musically, a unique an awesome listen.  But, contextually, who would dare re-work a song that stood for understanding racism in society into a story about a petty relationship break-up?  The album still is a daring piece-of-work that gets better with every listening.  And unfortunately, no artist since Outkast has dared to redefine hip-hop.  So if Big Boi and Andre 3000 are Lennon and McCartney, then Kanye West is Brian Wilson and Yeezus is his Pet Sounds.  In the end, it’s not wrong to like egotistical assholes (look at athletes like Michael Jordan;  obviously some conceit was involved in order for him to reach the iconic status everyone want be like). The history books are gonna look back at Kanye and show off his musicality, not his Kimye-ish douchbaggery.

06- The Front Bottoms - Talon Of The Hawk
I will always overvalue NJ bands I like, so get over it.

08- Laura Marling - Once I Was an Eagle
Few artists understand continuity in creating an album;  Laura Marling truly embraces it here.

10- Queens Of The Stone Age - …Like Clockwork
If you still like to bang your head, I can offer you this;  I only wish there was more to offer.  It’s gotten to the point where hard rock is more “indie” than indie rock.

01- Step - Vampire Weekend
Yes, it’s the one song that can truly hit hard with avid music enthusiasts.  For one, it samples a hip-hop song that people in the Bay and Souls To Mischief die-hards would only be familiar with. For another, it has introspective insight on the relationship people have with music and how it can go too far. See, when you step to my “girl”, the reality is that no one can possess the vision I have of her.  Countless hours of listening shaped that love.  My view isn’t right, isn’t progressive, isn’t shattering;  but it’s the “girl” no one can ever take from me.

02- Bound 2 - Kanye West
Adding on to my Pet Sounds tangent, with Bound 2 being  the most dissimilar song on Yeezus, I am not afraid to call it the Good Vibrations of this recording session. While Good Vibrations did change pop music, I can only hope Bound 2 can change hip-hop in some way.  The Charlie Wilson hook alone is heartfelt. Also, the lack of bass insinuates a musicality that most rappers are afraid to attack forcing said lyricist to hide behind a generic production beat. Yes, and if the video never came out, I could've hoped it was possible.

03- Recover - Chvrches
This year, it was Icona Pop’s “I Love It”. Next year, this will be my nomination for song from year before you will most likely to hear on Girls next season and transform into a true pop radio hit.

04- Shabba - A$AP Ferg (feat. A$AP Rocky)
Perhaps the only hip-hop song that fully responded to Kendrick Lamar’s call-to-action (yes, I was hoping for a Golden Age of Hip-Hop to continue into this year, but I think Kendrick Lamar’s “Control” verse prevented, it making aspiring stars fell inadequate at the moment.)  Nothing will beat 90s hip-hop and dancehall and the song ultimately proves that point.

05- Lose Yourself To Dance - Daft Punk
Sorry,  probably the only reason I like this song more than Get Lucky comes fron the fact and I don;t have to hear it all the time on the radio. ....oh, and it really does make me wanna dance.

06- Stay High (Tove Lo Flip) - Hippie Sabotage
I still listen to the Hype Machine every now and then, and this song is the best hidden gem I got out of it.

09- Get Free - Major Lazier
Not a song you would expect from the Major Lazer repertoire, but I could listen to this on repeat if forced.

..as for ranking the three obvious to be on anyone else's list
18- Royals - Lorde
19- Get Lucky - Daft Punk
20- Blurred Lines - Marvin Gaye (sorry, Freudian slip)
…Most likely, these songs will appear high on other lists, but Royals is first because of how shockingly good it is when you first hear it, so I prefer this song win all those Year-End awards.

RIP, Lou Reed - Yeah, it sucks that my first introduction of your work came in the form of Marky Mark and the Funky Bunch,  but the Velvet Underground will always be the model of attaining try pop culture elegance.

Please check your Twitter Application details, that you have specified the number of tweets to load, if you have ran out of API requests, or if your account is set to private